ASM Software was able to build and run the 8051 emulator emu51 (http://emu51.sourceforge.net/) under GNU/Linux. 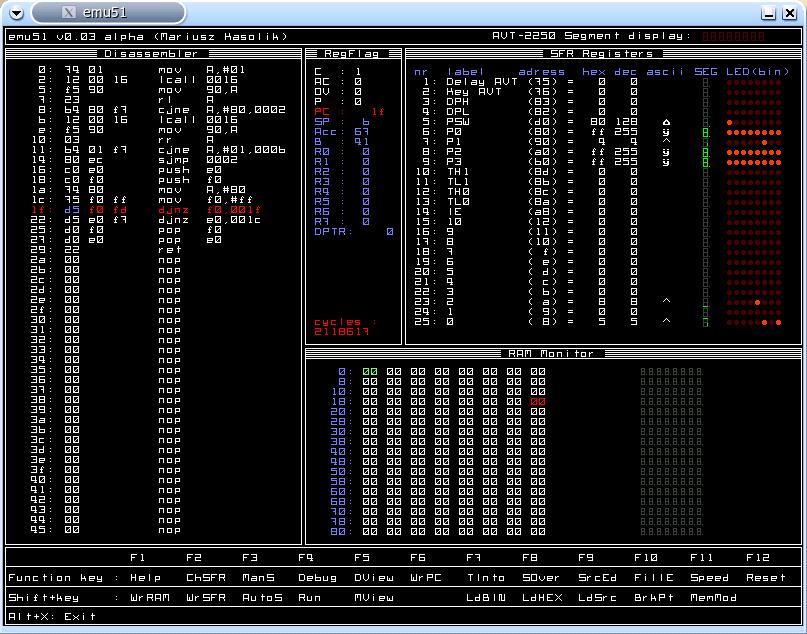 Download the source distribution, make sure you have the Allegro library installed, and now compile emu51 with this Makefile.

The emulator seems to work but keep in mind it is very early alpha and the interface not that easy.

If you use SDCC, make sure to issue the packihx command first. emu51 has problems with reading the .ihx output of SDCC properly.

Once a port to the SDL library was planned but the project was abandoned due to lack of time.

This is a small tutorial how to invoke and use the Small Devices C Compiler (SDCC).
SDCC can be found at http://sdcc.sourceforge.net/. It is a cross compiler for ANSI C with various MCU targets including MCS51, PIC14 and Z80.
All testing has been done under GNU/Linux and the instructions to build and operate SDCC under other operating systems may vary considerably.

The compiler comes as a standard GNU package as sourcecode licensed under the GNU General Public License. Just go to http://sdcc.sourceforge.net/ and grab a current source distribution. Now follow these simple steps to build, test and install the compiler:

To build SDCC, you will need GNU Make, GCC, Flex and somemore tools. A standard GNU development and compiling environment should suffice.

The first compiler test is simple: just type at your shell prompt:

If you see the following output in your terminal, all went well and SDCC was properly installed on your system.

Now SDCC is installed and should be ready to build programs for any supported MCU.

As I have a mcu board with a MCS51 compatible controller, we’ll assume from now on that you will want to develop your C program for a MCS51 target.
Write your C program with your favourite editor, make sure to include 8051.h to gain access to all 8051 SFRs.

SDCC will output an awful lot of temporary and listing files while compiling the program. If all goes well, you will get an Intel HEX file called porttest.ihx.

It is a good idea to use the packihx command on the resulting .ihx as the output of SDCC is not compatible with all loaders. It works with IO redirection:

By default SDCC will relocate your program to address 0x0 including a proper interrupt vector table in case you have defined interrupts from C. That is possible, just refer to the SDCC documentation. Now put the HEX file into your code memory and run it.

Relocating your program to a different location

Sometimes you will not want to relocate your program to run from 0x0. Perhaps you have a board with RAM mapped as code memory and it does not start at 0x0. Using assembly language you would simply put an ORG 0x4000 or similar into your source. SDCC has to be instructed with a compile time parameter to achieve the same effect.
Try:

SDCC cannot only output your program as a Intel HEX file but also in Motorola S-Record format. Just use a commandline like this:

In case you need different output formats you can use the SRecord software package to convert from Intel Hex or Motorola S-Record to many lesser known file formats.

For more detailed documentation, especially on usable memory models, inline assembler and interrupt handling, refer to the excellent SDCC documentation which should be included in your SDCC source package.
This concludes our little SDCC tutorial and we hope you will be able to get started with software development in C for your MCU with the SDCC system.

This page contains some simple projects and programs for use with the SDCC compiler and a 8051 compatible mcu.

A/D convertor access for Atmel T89C51CC02
This sample C file for the SDCC compiler supplies a simple routine to measure voltages with the builtin analog-digital convertor of the Atmel T89C51CC02.
The routine works with simple polling.
Download (0.7k)

SIO Test
A simple test program to initialize and use the SIO of a 8051 mcu from the SDCC compiler using autobaud detection and polling variants of putchar() and getchar().
Download (3.6k)

Delay
A simple routine which uses inline assembly to give a delay routine. It waits for 100ms on a MCU clocked at 12MHz with default of 12 cycles per instruction.
Download (0.5k)

MicroSIO
A small lib for use with SDCC and a 8051 target for using the SIO in polled mode without disabling a running SIO IRQ. It is intended for use with the Tasking Monitor and a preconfigured SIO. The routines  have been tested with my development board. A Makefile for multiple file SDCC project include.
Download (1.5k)

ASM Software Monitor-52 is a monitor/debugger for 8052 compatible mcus with the possibility to have code memory mapped into external RAM like my development board by Phytec does.

THIS IS A EDUCATIONAL PROJECT WITH THE PURPOSE ON LEARNING HOW IT HAS TO BE DONE. IT IS NOT MEANT TO BE USED COMMERCIALLY OR TO BE SOLD.
amon52 features:

The current state of the project is not completely functional, buggy, tailored to be run from inside the Tasking monitor and comes without documentation or warranty.

ALPHA SOFTWARE – DO NOT USE IN PRODUCTION SYSTEMS UNTIL FURTHER NOTICE!

This monitor source is specially configured to work with the PHYtec microMODUL-8051. It should work on any board with few changes necessary. (Mainly comment the Phytec memory init routine out.)

screen shot of v0.2 running on my board

Compiling
To compile amon52, you will need Asem-51, SDCC and GNU Make.

Here you can find some tools, configuration files and generic information regarding MCS51 compatible mcus.

as31 assembler for Intel 8051 derivates

This is a patched version of the famous as31 assembler. It is now compatible with our development board. And can therefor be used with other Phytec 8051 boards and units as well. The original of the assembler can be found at Paul’s 8051 tools.
Download (83.5 K)

A simple syntax highlighting definition for the text editor Kate for highlighting as31 source files.
Assigns itself for .a51 extension.
Download .xml file (5.7 K) 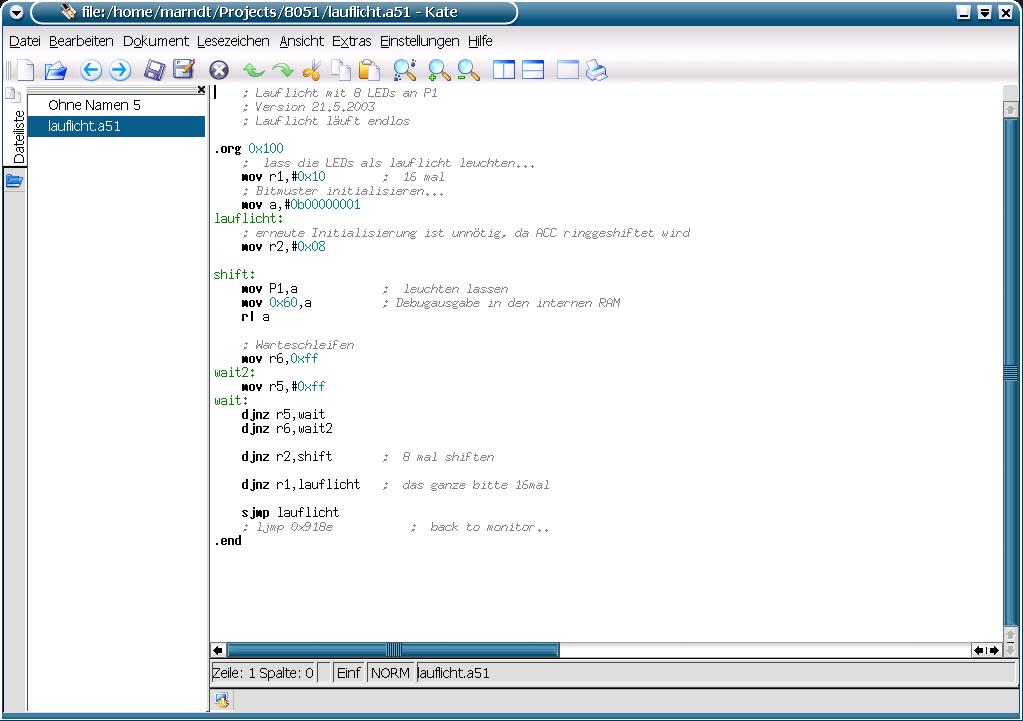